based on high resolution DAC

To be able to speed-up high-resolution ΣΔ ADC design, Axiom IC has developed an ADC concept that relies heavily on digital signal processing together with a special multibit D/A converter in the feedback path. This DAC is silicon-proven, well characterized and easy to port or modify (see SDCRDAC24bHBW datasheet).

The ADC concept was initially developed for bandwidths of 5/10/20kHz, and SNR ratios of 110dB-120dB, with 24bit outputs. However, the system can easily be dimensioned for other bandwidths or SNR values. Two implementation variants are shown in figure 1 and 2, with the gray area marking the contents of the proposed ADC's.

Both ADC's use Axiom's SDCRDAC24bHBW IP block as DAC, as this sigma-delta DAC has proven itself in other applications with low signal frequencies. It is temperature stable, has very low 1/f noise and a high resolution.

Additional components needed to make an ADC are a first-order analog filter, comparator and digital signal processing. Due to the low signal frequencies, chopping will be used inside the ADC, to remove offset and 1/f noise.

The two ADC variants differ in how the analog filter is implemented. It can be either implemented as a passive filter with a Cext in the order of 10nF or higher (so probably external), or with an on-chip active filter

Two variants of this design are shown on the right. 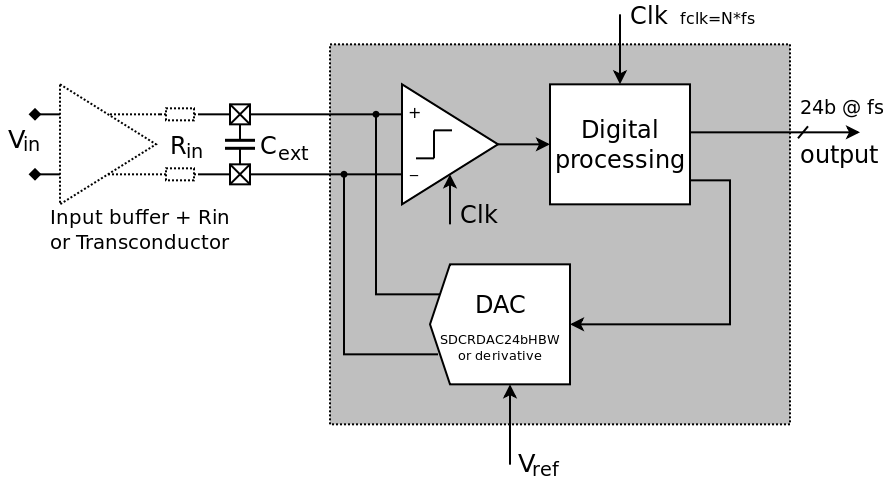 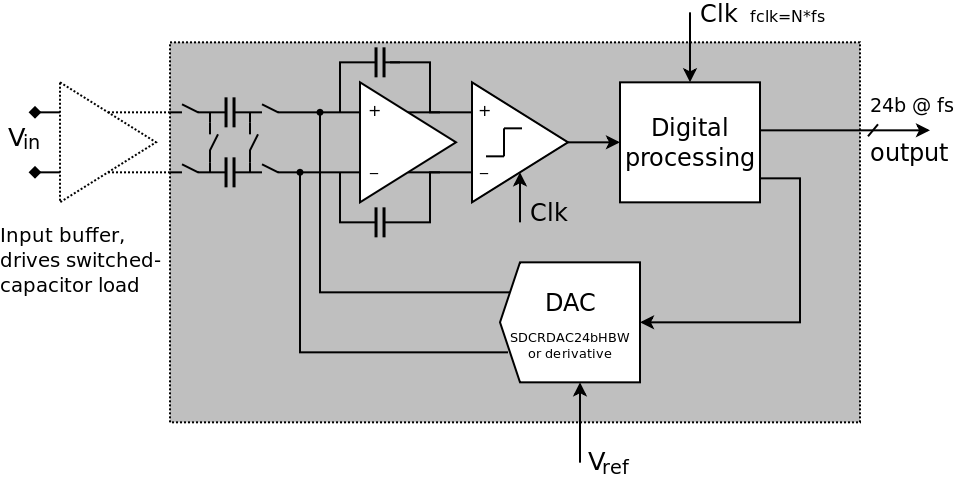 This ADC mostly resembles a traditional sigma-delta structure, as it uses an active integrator as a loop-filter (which adds one order of noise-shaping. Higher-order noise-shaping is done in the digital domain). With this setup, the system can interface with switched-capacitor, sampled front-ends. It the input is continuous-time, then an input-buffer is needed to charge the switched-capacitor input load at the input sample rate (5 MHz) with enough settling (e.g. >12tau). Note that, Axiom can also take care of the design of the input buffer, with which Axiom has plenty experience.

The second type of ADC ommits active filtering altogether, further reducing the number of analog parts that have to be designed/integrated. Instead, the filtering is done with an external RC filter. An advantage of the passive filter in the implementation in figure 2 is the relaxed requirements for the input buffer (which can be either a voltage buffer that drives Rin or can be a transconductor in which case Rin can be omitted).

The SDCRDAC24bHBW is a differential DAC (DM-DAC), but with some additional circuits, the ADC is able to convert both differential as well as single-ended input signals. The input resistors (Rin) determine the input voltage range, which can thus be rail-to-rail (but also outside the supply rails or referenced to 'true-ground' when that is of interest).

Next to the feedback DAC, the number of analog components in the ADC can be kept to a minimum, enabling fast, low-risk implementation cycles. It is even possible to build ADC demonstrators with the existing DAC IP, to further increase confidence prior to tape-out.