Boston, MA, May 3, 2016 – Teledyne DALSA announced today at The Vision Show, that its TurboDrive technology was awarded GOLD by the judges of the annual Vision Systems Design Innovators Awards program. The judging panel consists of esteemed experts from system integrator and end-user companies.

Teledyne DALSA’s patent-pending TurboDrive™ data encoding technology lets GigE Vision cameras go beyond current bandwidth limitations - increasing throughput by as much as 150% while retaining 100% image data; allowing its Genie Nano and Linea line scan cameras to send pixel information at a rate in excess of 125 MB/s, speeding up line and frame rates beyond the nominal link capacity. The degree of improvement is dependent on the image itself, but is often double standard throughput.

“We're grateful for the recognition and prestige of being honoured as a gold award recipient,” commented Philip Colet, Vice-President of Sales for North America and Europe, “We see TurboDrive as a game-changer for customers looking to optimize their inspections with affordable, innovative and faster imaging without compromise.”

Alan Bergstein, publisher of Vision Systems Design said, “This prestigious program allows Vision Systems Design to celebrate and recognize the most innovative products and services in the vision and image processing industry. Our 2016 honorees are an outstanding example of companies who are making an impact in the industry.”

The Innovators Awards are judged based on the following criteria:

The 2016 Innovators awards Honorees are featured in the June Issue of Vision Systems Design magazine as well as on www.vision-systems.com. 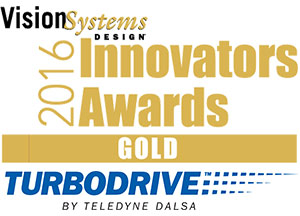