The trans-Pacific demonstration, which took place simultaneously at the California Institute for Telecommunications and Information Technology (Calit2), University of California, San Diego (UCSD), and at the digital cinema laboratory at Keio University in Tokyo, simulated a multi-site "digital dailies" scenario, in which members of a production team, typically the cinematographer, director, and producer, can collaborate on a motion picture production even if they are in different locations.

The iGrid experiment marked the world's first international real-time collaboration on motion picture content at 4K resolution. "4K" (roughly equivalent to 4000 horizontal pixels) is the high resolution digital image format that is already being used for post-production on a growing number of major Hollywood films and will also be widely employed for future digital cinema theatrical distribution under new specifications proposed by Digital Cinema Initiatives, LLC, a consortium of the seven major Hollywood studios.

The iGRID 4K Demonstration
At Keio University in Japan, uncompressed 4K digital footage from the Origin camera was fed into a Silicon Graphics Prism™ visualization system from SGI (NYSE: SGI) running The Pixel Farm PFPlay software. The operator in Japan created a playlist from several 4K uncompressed clips on the SGI® system using Pixel Farm PFPlay software. The 4K data was then encoded using an NTT JPEG 2000 encoder to approximately 200Mbps and sent from Japan over fiber optic IP networks to San Diego where it was decoded and played back on a prototype Sony SXRD 4K (3840 x 2160) projector installed at Calit2's new 200 seat theatre.

The 4K digital content from the DALSA camera was then edited in the iGrid conference auditorium and the modifications were sent back immediately in real-time to Tokyo for final conforming of the 4K data. The newly generated modified playlist was once again compressed and re-sent, decoded and played back in 4K to the audience in San Diego.

Commenting on the participant's reaction to yesterday's demonstration, iGrid 2005 co-Chair Tom DeFanti said, "The 4K workflow being pioneered by DALSA, SGI, NTT and others for Digital Cinema appears to offer many benefits not only for those involved in motion picture production, but also for scientists and educators working with high resolution images. This demonstration shows how we can use networks as a common infrastructure to bring talented people together, no matter what their field."

"In a demonstration of the future of 4K workflow, it was only logical to feature uncompressed 4K source footage from the DALSA Origin camera," commented Louise Ledeen, Senior Marketing Manager, SGI. "Like SGI and the other companies and organizations that participated in iGrid 2005, DALSA is taking a pioneering role in validating what we believe will become a viable, end-to-end 4K digital cinema workflow."

"We are pleased to have footage from the Origin camera featured in what is clearly a landmark event in the evolution of 4K workflow," said Brian Doody, President, DALSA Digital Imaging. "We've long believed that 4K is the future, so it's very satisfying to see such a well orchestrated demonstration of how close we are to having this level of collaborative workflow become an everyday part of motion picture production."

About DALSA Corporation
DALSA is an international high performance semiconductor and electronics company that designs, develops, manufactures, and markets digital imaging products and solutions, in addition to providing semiconductor products and services. DALSA's core competencies are in specialized integrated circuit and electronics technology, software, and highly engineered semiconductor wafer processing. Products and services include image sensor components; electronic digital cameras; vision processors; image processing software; and semiconductor wafer foundry services for use in MEMS, high-voltage semiconductors, image sensors and mixed-signal CMOS chips. DALSA is listed on the Toronto Stock Exchange under the symbol "DSA". The Company has its corporate offices in Waterloo, ON and over 1000 employees world-wide. 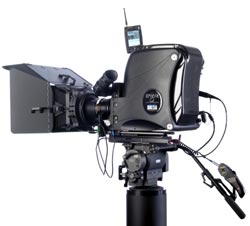