Waterloo, CANADA - August 6, 2012 - Teledyne DALSA, a Teledyne Technologies Incorporated (NYSE:TDY) company, is pleased to offer its most sincere congratulations to NASA and JPL on the successful deployment of the Mars Science Laboratory rover "Curiosity" in Gale Crater on Mars. Curiosity is the largest rover ever launched by NASA, and it will be used to determine whether Mars is, or ever has been, hospitable to microbial life.

Teledyne DALSA is proud to contribute to the mission's success. The image sensors for the Curiosity's Navcams and Hazcams were built in our Bromont, Quebec, semiconductor foundry, as were those on the previous Spirit and Opportunity rovers. The hazard avoidance cameras are installed on each corner of the rover and the 3D stereoscopic navigation cameras are part of the rover's camera mast.

These image sensors represent only a part of Teledyne's overall contributions to the launch, landing, and operation of the mission. No fewer than five Teledyne companies contributed components crucial to the mission's success:

"It gives me great pride to be able to contribute to a project that poses such technical challenges and holds such promise for the advancement of science and knowledge," observed Robert Mehrabian, chairman, president and chief executive officer of Teledyne. "I am also delighted to see how many ways and in how many places Teledyne contributes. From the deepest parts of this planet's oceans to the mountains of Mars and out past the edges of our solar system, Teledyne technology enables exploration, analysis, and communication."

For more on the Mars Science Laboratory and Curiosity, visit http://marsprogram.jpl.nasa.gov/msl/ 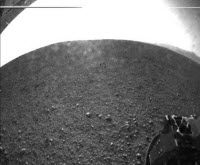 This image from one of Curiosity's Hazard-Avoidance cameras was taken August 6 with an image sensor built in Teledyne DALSA's Bromont semiconductor foundry. Image credit: NASA/JPL-Caltech