Like many organizations, Teledyne DALSA has a healthy population of sports enthusiasts. After working hard all day, plenty of them like to play hard too. This past weekend, the Teledyne DALSA Scanners 3-pitch baseball team finished a strong 3rd in their end-of-season tournament.

The team plays in a mixed recreational league against other high-tech companies in Waterloo, and while the emphasis is on fun and participation, there is no shortage of competitive spirit. Teledyne DALSA employee players Marj Bauman, Hank Helmond, Chris Coggins, Patrick Myles, Tyler Jeffery, Brian Tucker, Mary Reitzel, and Mark Butler together with former employees, friends and family players Frank Marr, Alicia Helmond, Kayla Helmond, and Rob Grant and supporters Rochelle Jones and Elizabeth Marr (Silvain) braved a weekend of unsettled weather to deliver some of their best performances of the season.

After the first game of the tournament was postponed due to rain (or more accurately, due to the pond that formed in the infield), the weather improved and the team won four of its next five games, taking upset wins over three higher ranked teams and earning a place in the semifinals. Although they lost a hard fought battle in the semis, the team is proud of their overachieving finish. While they nurse their aches they can savor highlights like these: 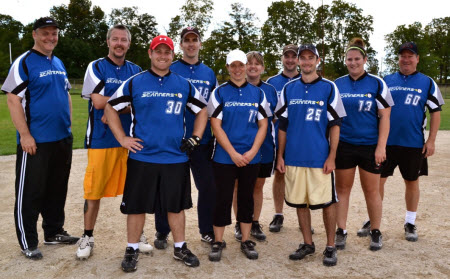 The Teledyne DALSA Scanners take themselves out to the ball game