The first episode of "Instant Def", a series of short movies by Snickers featuring the Black Eyed Peas shot with DALSA's Origin 4K camera, was released today across North America.

In each "digi-sode," the Black Eyed Peas play superheroes that must "save hip-hop" from "violence and materialism." The pieces incorporate extensive visual effects (VFX) and so were shot against a greenscreen, an approach that demands extremely high resolution for sharp edges. Origin's incredible resolution and exposure latitude and rich, grain-free images delivered some of the best VFX "plates" that the postproducers had ever seen, and Origin's digital workflow made the images immediately available, providing great savings in both money and time.

As previously announced, the digisodes will appear in theatrical trailers, television commercials and through web distribution as part of an advertising campaign for Snickers. The eight day shoot was produced by "Form", a Los Angeles based Production Company, and directed by Jesse Dylan. The director of photography was Rolf Kesterman.

"We had a very aggressive shooting schedule and the camera saved us a lot of time. Constantly re-loading film magazines would have killed us on this project. With the Origin camera we just kept shooting," commented director, Jesse Dylan. "Throughout the production the DALSA team were consummate professionals. I can see this 4K camera being used more and more in the future. I would use it again in a heart beat." Director of photography, Rolf Kesterman added, "The Origin camera fit very well into the film production environment. I would certainly use it again."

To see the web digisodes, visit www.instantdef.com. You won't see the full image quality over the web, but look for trailers in theatres (preferably high-resolution digital theatres) this summer.

For more in the Origin camera, visit our Digital Cinema website. 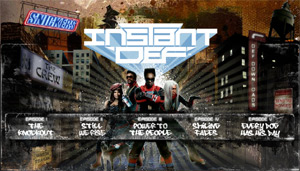 'Instant Def' featuring the Black Eyed Peas was shot in 4K with Origin. For a low-resolution web trailer, visit www.instantdef.com.