The new and innovative products, which will be rolled out over the next year, build on DALSA's 25+ year reputation as an international leader in high performance digital imaging and as a pioneer in 4K, the emerging quality standard for image capture and archiving of motion picture content.

"First and foremost, our product line reflects DALSA's commitment to bringing the very best digital capture tools to the motion picture industry, with our constant emphasis on image quality," commented Rob Hummel, President of DALSA Digital Cinema LA. "Basically, we're talking about the ability to shoot at 4K resolution, 16-bit, uncompressed, untethered, using the highest quality anamorphic lenses. I think cinematographers will be particularly thrilled that, for the first time, a digital camera will be able to capture the CinemaScope 2.40:1 aspect ratio without compromising image quality."

"Leading the pack for us at NAB, is how DALSA has listened to the input from cinematographers, and responded with the new Evolution 4K camera. Smaller, and lighter than its big brother, the Origin II, we think the Evolution camera will empower the cinematographer's creativity even more. Obviously, we're looking forward to seeing the reaction to our exciting new products at NAB and demonstrating that everything looks better when you start in 4K."

New Products to be showcased at NAB

DALSA and 4K – a history that goes back almost 20 years
Although "4K" is a relatively new term in the field of cinematography and motion picture archiving, it actually dates back to the late 1980s and the early days of machine vision. In the late 1980s, DALSA released the world's first commercially available high performance line scan image sensor chip capable of capturing at 4K resolution (4096 pixels per horizontal line). The company's chip technology evolved over the next decade into a viable and widely deployed solution for scanning 35mm film, which helped to usher in an era of affordable, high quality 2K and 4K film scanning and lead to the successful restoration of film classics and the digitization of new projects as the motion picture industry moved toward the digital intermediate process. In the late 1990s, the company developed the world's first 35mm sized, 8 million pixel image sensor chip for Japan's NHK. That development proved to be a springboard for the eventual development of the current DALSA motion picture image sensor and the award-winning DALSA Origin 4K camera, which was launched at NAB in 2003. In 2005, Director and visual effects guru, Alan Chan, used the Origin to shoot the world's first, fully digital, 4K feature, "Postcards from the Future," which will have its premiere in May, 2007. After nearly 20 years, DALSA's 4K legacy continues, as the company delivers on their commitment to bringing the motion picture industry the very best image capture tools, without compromising on image quality.

About DALSA Corporation
DALSA is an international leader in high performance digital imaging and semiconductors with more than 1000 employees world-wide. Established in 1980, the Company designs, develops, manufactures, and markets digital imaging products and solutions, in addition to providing semiconductor products and services. DALSA's core competencies are in specialized integrated circuit and electronics technology, software, and highly engineered semiconductor wafer processing. Products and services include image sensor components (CCD and CMOS); electronic digital cameras; vision processors; image processing software; and semiconductor wafer foundry services for use in MEMS, high-voltage semiconductors, image sensors and mixed-signal CMOS chips. DALSA is listed on the Toronto Stock Exchange under the symbol "DSA" and has its corporate offices in Waterloo, Ontario, Canada. 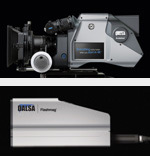 DALSA's new Evolution 4K camera is smaller and lighter than its big brother, the Origin II, and offers onboard recording with our Flashmag™. Both available early 2008.