DALSA founder Savvas Chamberlain to be honored with industry award

Presented for exceptional service to the image sensor specialist community, the 2019 award recognizes Dr. Chamberlain's “Contributions to the organization of what is now the International Image Sensor Workshop”. The award ceremony will be held during the 2019 IISW at Snowbird, Utah.

A pioneering researcher in both CCD and CMOS image sensors as far back as 1969, Dr. Chamberlain founded DALSA in 1980. He chaired the the 1991 IEEE CCD Workshop and 1993 IEEE Workshop on CCD and Advanced Image Sensors, bringing them both to Waterloo, Canada. He also served as organizer for the 1995 workshop and helped grow the workshop and improve its organization considerably.

During his 30-year career as a professor at the University of Waterloo, Dr. Chamberlain made many important contributions and published more than 100 papers in refereed scientific journals and conference proceedings. He was integral to building a world-class electrical engineering program and through his efforts and leadership, the University's first microelectronics laboratory was established.

Dr. Chamberlain's research into CMOS and CCD image sensors earned him 22 patents in semiconductor design and fabrication, and his entrepreneurial spirit helped him turn his research into a robust business delivering world-leading performance in digital imaging and specialized semiconductor fabrication. DALSA was acquired by Teledyne Technologies in 2011. 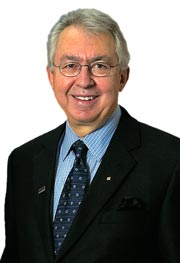